It would appear my blood levels are increasing so I may be out soon, maybe in 6 days time.

It also appears my PICC line was the source of the infection.  I still have a slightly elevated temperature but I am afebrile.

My temperature spiked as expected it would do at some point.  This was on sunday evening.  I was put onto IV antibiotics  of various forms and some blood taken from my PICC line and straight from a vein.  The sample from the vein is used to determine if the PICC line is the source of the infection.

The next day I was shagged and slept for a fair bit of it.

On tuesday I had to make sure I kept taking panadol every four hours otherwise I would get the rigors.  Brought back memories of the leg infection.

Then on wednesday I get a stinking headache which would not go away.  No idea what caused it but it was not much fun.

I stopped taking the antifungal medication a couple of days ago and my liver returned to normal very quickly.  They have now put me on a different antifungal medication.  It is an interesting effect – a chance of hallucinations.  I haven’t had any yet although I did turn the lights off last night and it was as though someone had turned a strobe light on somewhere, the whole room was flashing at a rapid rate between light and dark.  Even more fun with my eyes shut.

BTW: The antifungal medication is to prevent fibrosis of the lungs.   Nasty.

I have also moved rooms due to renovations and the ‘superbug’.  I picked up the superbug during one of my previous visits.

I will post a photo later of my new room.

Hi, this is Clare blogging for Phil. He is not feeling the best at the moment as he is running a temperature. He is on antibiotics and panadeine to keep it under control, hopefully should come down in a couple of days. Unfortunately his liver isn’t coping too well with the Anti Fungal medication so he has to come off this for probably a couple of days. Other than that he is coping very well. Keep sending emails and comments, he appreciates all your thoughts. Thanks

Not much to say really as everything is moving along normally.

I finished the chemo drugs a few days ago.  The last few days have been a bit more comfortable as a result.  I was feeling a little bit sick from the chemo drugs so it is a good thing they are finished.  There is nothing worse than feeling sick, think of seasickness.

My blood levels are dropping as expected.  Platelets are below 20 so I will be getting a transfusion of platelets tomorrow.

The white cell counts are also getting low.  It is only a matter of time before I get a temperature and require IV antibiotics.  Nothing unusual.

Now to play a few games and listen to some music on my IPod touch before bed.

Here is a photo of my PICC line, a bit blurry but it is hard to take a photo ones own arm in this position. 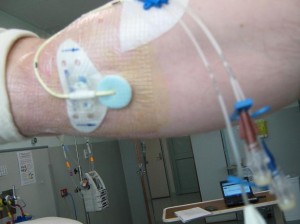 My chemo starts today.  My treatment is called Flag-Ida. It consists of 5 days of chemo. The drugs I will be getting are Idarubucin, Fludarabine, and Cytarabine. I will be getting the Idarubucin for3 day and the others for 5 days. After the chemo I will get a shot of Subcut Filgrastim (GCSF).  Tasty  stuff!

All of this should, all going  well, take 3 months

After the three months I will probably be getting a stem cell transplant. Luckily for me I have three potential donors, my sister and two unrelated people. My sister is a 7/8 match which is OK except she has also had children.  Apparently this means it is unlikely she will be the donor. Instead one of the other two matches will be used.  I believe both of them are an 8/8 match. One of them is also male which apparently is preferred over females for some reason.

Got my PICC line put  in this morning. I have a nice big vein in my right arm so the procedure was nice and quick, about 15 minutes. It was due to go in at 10:00am but for some reason it was postponed to 12 – I finally got in at 1:30. There is always a lot of waiting around in hospital.

After the PICC I went to ward D6, my home for the next 4 weeks. Chemo will start tomorrow morning. 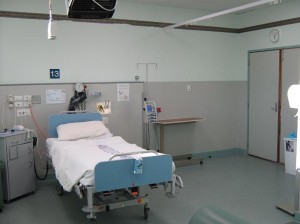 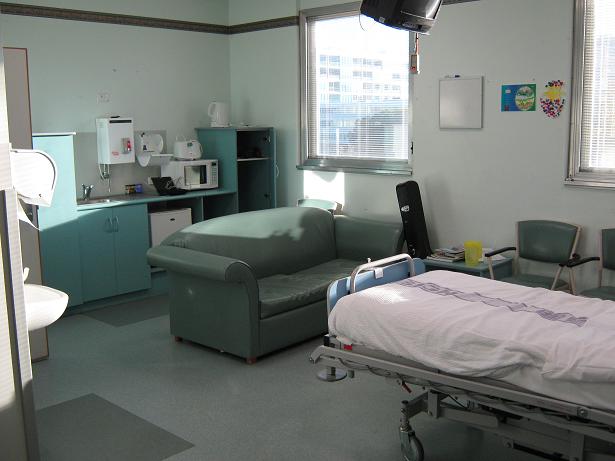 I had my bone marrow biopsy today. It did not take long for the actual procedure. However, I did have to wait a few hours due to me having this VRE thing – I am last in the queue so they can scrub the room afterwards ready for the next days patients.

It is a very strange experience due to the drug they give you to help you relax. For me the drug causes me to not remember anything during the procedure. One minute I am sitting there getting the juice, the next minute it is all over and I am in the recovery area. It is a bizarre feeling. Apparently I am alert and talking during this period but I remember nothing.

By the way, it is a painless procedure. At least they assure me it is – I can’t remember.

Looks like the AML is back.  I will endevour to put some stuff on here once I get to hospital in a weeks time.

Bummer – I have Acute Myeloid Leukemia.